Since these emoji are tiny on most devices, and since most people just type “train” and select something, and since many people are not too bothered about which one to use, they tend to get jumbled up.  But anyway, here is what they’re supposed to be used for:

While it might seem like the red O emoji ⭕ is ideal for the O-Train, there are two issues:

Apple iOS 8.3 adds many new emoji (these symbols are standardized by the Unicode Consortium, not by Apple).  It also has a new, much larger display (emoji keyboard) with clearer groupings.  But not quite clear enough.

Perhaps it’s because Apple has a giant suburban US campus, but some of their transportation emoji are difficult to distinguish (there is a whole separate issue, which is that you only get the tiny icon, instead of being able to tap-and-hold to get a much larger more detailed icon with a text explanation).

Here are most (but not all) of the selections 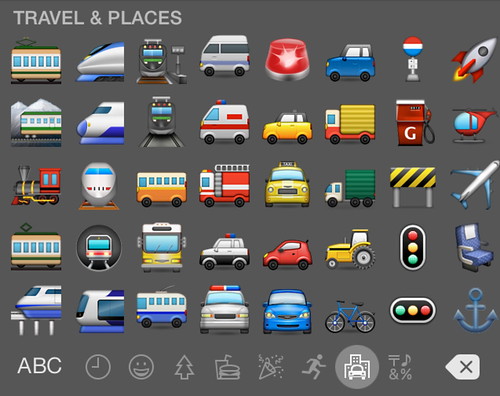 As you can see, two of the entries in the far-left column look almost identifical.  They are actually railway car and tram car.  Here they are at double size, with explanation and Twitter icons (apologies for my clumsy graphics editing skills). 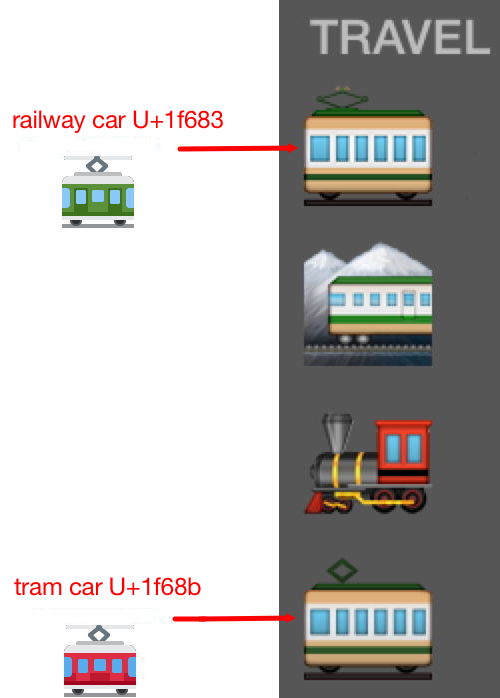 You can see good info, with the representations used in multiple different operating systems, at EmojiBase:

(In fairness to Apple, the Android emoji are much worse, rendering the railway car like a bus.)