I now understand why Ottawa chose a low-floor LRT rather than either a high-floor metro or a mix of a metro in the core and LRT at the edges.  I’m not convinced we wouldn’t have been better off with a core metro and edge LRT system, although it would have meant transfers at the edge of the system.

Ultimately we chose an all-LRT system that optimised for the suburban commute rather than for core urban transit.

The documentation is only about the general system, it doesn’t describe why we chose the particular vehicle we are using on Line 1.

On the agenda for their consideration was the Rail System Selection Report, ACS2009-ICS-TRA-0017.

The direction given was

That Transit Committee recommend that Council approve that the Rail technology for the City’s Rapid Transit Plan be Light Rail Transit (LRT).

They didn’t envision running the high-capacity system outside the core, which created a problem: outside the core (out into the Greenbelt and beyond, the suburbs, “the extensions”) passengers would have to switch to a lower capacity, possibly non-separated (“non-segregated”) light rail system.  They concluded it would be better to have light rail throughout rather than two systems.

They were trying to optimise over three different kinds of transit networks, which I think in retrospect was a mistake.  They were trying to optimise across a high-capacity core network, a lower-passenger-volume extended network into the suburbs, and a secondary network of supporting transit routes, including an at-grade surface rail route on Carling.  In my opinion, this was too many things to try to do with one vehicle.  (See section Three different transit systems for more info.)

They cite a Delcan Transit Technology Choice Report (PDF) commissioned by the city (copy in Internet Archive).  But here’s the thing, they don’t cite this part of the report:

The combination of Light Rail Vehicle with a CBTC system to provide 20,000 pphpd [persons per hour per direction] has not yet been proven in revenue service.

This seems a rather important oversight.  Nevertheless, the Delcan report did recommend LRT.

You can compare the Transit Commission key summary with the Delcan report’s key summary below.

I would note that the criteria “At least five years in revenue service” was not met by the Citadis Spirit LRT vehicles that were ultimately chosen.  (Nor for that matter by the low-passenger-volume Citadis Dualis vehicle the Spirit is based on.)

The direction given was

That Council approve that the Rail technology for the City’s Rapid Transit Plan be Light Rail Transit (LRT).

Motion CARRIED with Councillors B. Monette and G. Hunter dissenting.

SIDEBAR 1: If you’re wondering what the difference between system types is, for a metro basically think subway cars, and for light rail / LRT basically think long streetcar.

A metro is always grade-separated (completely separated from car traffic), whereas an LRT may be surface rail sharing space on the street with cars (although in the end Ottawa decided to have an LRT that is completely grade-separated).

A metro has much higher capacity to move passengers per hour (on the order of up to five times the top LRT capacity).  A metro is high-floor (wheels are below the floor), while a modern LRT is typically low-floor (wheel bumps are inside the passenger space).  You can find a bit more info in my blog post Ottawa LRT design issues, low-floor versus high-floor.  END SIDEBAR

SIDEBAR 2: The analysis was informed to some extent by a Light Rail Transit (LRT) Technology Forum held in June 2009, however with the forum webpages gone, I have had to reconstruct some of the information that was presented. Of particular interest would have been the presentations by transit vehicle vendors but these aren’t online.  I did find a couple slides from the presentations that help explain more about the number of passengers a metro can carry versus an LRT.  END SIDEBAR

Footnote: 1 In order to meet the 2031 core capacity requirement, the vehicles associated with the LRT system will require operation with less distance between them. This requires a modern Automatic Train Control (ATC) system based on a Communications Based Train Control (CBTC) system.

The study reveals that the implementation of a high capacity Light Metro style system could, as LRT is implemented in suburban areas, divide Ottawa’s transportation network which would result in a fragmented network. This dual mode network is not desirable given the overall associated costs.

The choice of a Light Metro system would effectively increase overall lifecycle costs due to the higher capital costs of segregation in the western corridor, which would offset any operational efficiencies.

In contrast, an LRT system permits a more efficient capacity match for the ridership prediction throughout the main core and outlying regions maximizing the overall flexibility in continuing to grow the system up to and beyond 2031.

The LRT system provides capacity in the downtown core, but will necessitate the use of automatic operation to maintain operational efficiency with higher ridership in later years.

In conclusion, Light Rail (LRT) is recommended as the preferred technology choice for deployment in Ottawa as it:

The [2008 Transportation Master Plan] TMP planning process was supported by a regional transportation model that projected future (2031) transit ridership through the downtown of Ottawa would reach 14,400 persons per hour per direction (pphpd) between Bayview Station and the future Downtown West Station (to be constructed as a part of the Downtown Ottawa Transit Tunnel project).

Additional volumes of passengers emanating from the N-S Line and the STO routes from Gatineau could increase potential volumes to 20,000pphpd should any future interprovincial rapid transit link feed into the planned TMP network west of the downtown. Based on this, and to provide an adequate spare capacity to accommodate future growth beyond 2031 and for the purposes of the technology selection, the ultimate capacity is considered to be 24,000 pphpd. It should be noted that for reasons of development constraints, the core may not increase beyond this ridership capacity.

Based on the above a number of different technologies were evaluated for suitability. Some technology choices such as monorail and heavy rail were discounted based on the evaluation criteria.

To meet the predicted ridership two generic system technology choices were considered more suitable to the City of Ottawa and carried forward for further evaluation:

The combination of Light Rail Vehicle with a CBTC system to provide 20,000 pphpd has not yet been proven in revenue service.

Editorial note: Delcan’s table is similar, but not identical, to the one in the City Rail Selection report.  Delcan’s third row “No more than one transfer and no in-line passenger transfers” is simply dropped.  Table embedded as an image below.

Note 1: In order to meet the 2031 core capacity requirement, the vehicles associated with the LRT system will require operation with less distance between them. This requires a more modern Automatic Train Control (ATC) system such as the Communications Based Train Control (CBTC) system.

A key finding of the report is that the choice of technology determines the future flexibility of a transportation network within Ottawa. By developing a Light Metro style system, the core will meet its capacity prediction targets and have sufficient margin for growth beyond the prediction; but the report finds that the potential capacity within the core may not warrant such a system.

The implementation of a high capacity light metro style system may divide Ottawa’s transportation network into a set of fragmented, unconnected and disparate transportation modes, which will multiply staff costs, overheads, maintenance and spares and maintenance facilities. This fragmentation will also cause numerous onward transfers between transport modes for daily passengers moving into the core from the suburbs.

The choice of a Light Metro system will effectively increase transportation costs due to higher costs of segregation for the outlying suburbs, which may result in lower efficiencies of running and potentially higher ticket costs.

In contrast, the report assesses the corridor with an LRT system which permits a more efficient capacity match for the ridership prediction throughout the main core and outlying regions.

The LRT system provides capacity for the main core but will necessitate some development of automatic operation to maintain operational efficiency at the end of the planning period and beyond. With this automation there will be some consequential development risk of migration of technology to the Light Rail Vehicle (LRV), but this should be balanced with the fact that any technology implementation within Ottawa’s climate will carry some residual development risk for manufacturers and integrators. However with the additional implementation of an automated system, the initial capital costs for both LRT and metro may be offset with a reduction in long term operating costs.

A hybrid version of driver operated/automated LRT provides long term flexibility to transit network planning and the possibility of on-street running, a lower cost segregated corridor and the reduced complexity of driver operation in the suburbs. More importantly the passenger is provided with minimal onward transfers when commuting: a key element in attracting ridership.

Light Rail is recommended as the technology choice for deployment in Ottawa as it:

Three different transit systems – One vehicle to rule them all?

Continuing with extracts from the Delcan report (PDF), pp. 1-3.

For the purpose of this study, the ultimate rapid transit network has been divided into three categories: 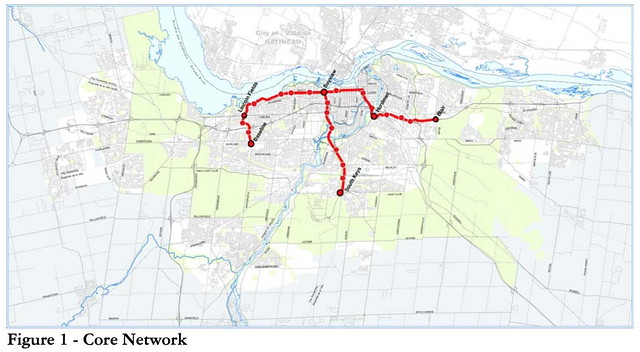 It’s hard to read the stations, the ones indicated from left to right are Baseline (end of line in the west), Lincoln Fields above it, Bayview at the intersection of the two lines, South Keys at the end of the central south line, Hurdman and then finally Blair at the end in the east. 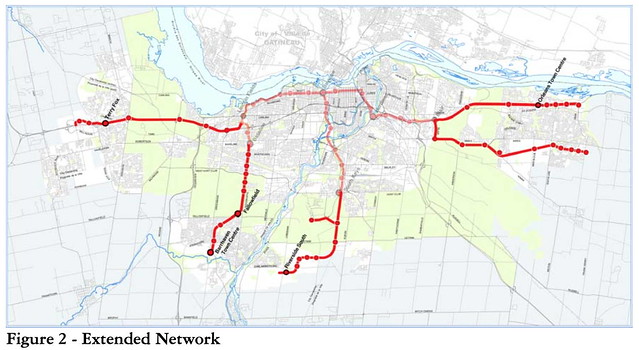 This is not a great diagram; they should have done the extended network in a different colour.  The core network in the centre is in pale red, the Extended Network is the dark red at the edges.  They have not really highlighted stations so much as indicated neighbourhoods – Terry Fox in Kanata in the west, Fallowfield (with possible VIA rail connection?) and Barrhaven Town Centre in the south west, Riverside South in the south centre, and Orleans Town Centre in the east.

So basically their thinking was that they needed high-capacity in the Core, and lower capacity in the Extended, but they didn’t want there to have to be a transfer to change between systems from extended in the suburbs to core in the central part of town.  Also they thought that they might use at-grade surface rail crossing the Greenbelt and possibly in some of the rest of the extended network rather than grade-separating it all.  So the decision was to use low-floor LRT for the entire thing. 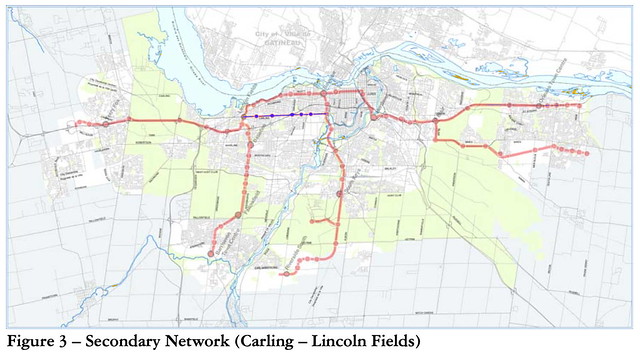 This is the last piece of the puzzle, which is that in addition to possibly running surface rail through the greenbelt or in the suburbs, they also envisioned running a secondary transit surface rail line along Carling.

The challenge in 2020 is that we ended up making different decisions than foreseen in 2009.  We’ve decided on a completely grade-separated network (which is the correct decision).

Secondary network – There are zero plans on the books for a Secondary Network (surface rail at grade) on Carling.

So we procured for a mixed grade-separated and at-grade system, but that’s not what we’re building.  By the time, if ever, that we do put in surface rail, it will be time to select different vehicles anyway.