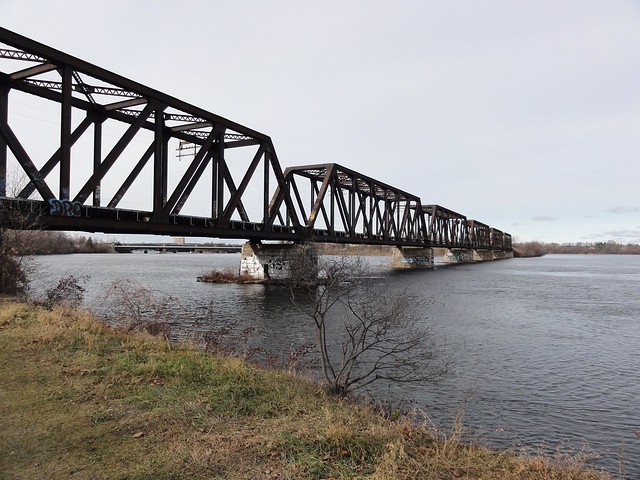 The Prince of Wales Bridge is currently closed.  Wikipedia tells me that it was built in 1880 and last used in 2001. 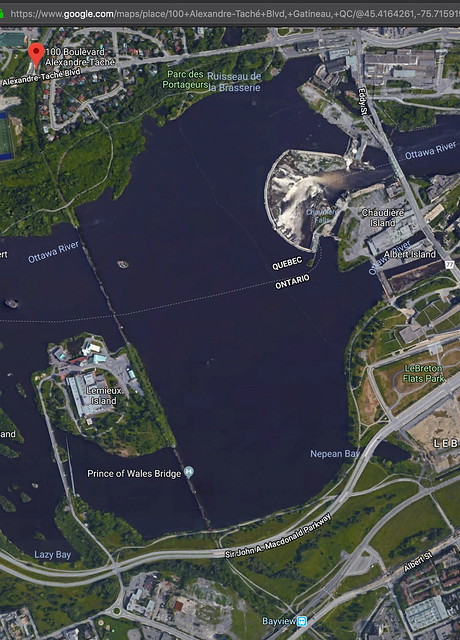 Although it was initially considered for a proposed rail transit connection to Ottawa from Gatineau, it has now been removed from consideration by STO in favour of the Portage Bridge.  The reasons cited for removing it from consideration included that OC Transpo’s Bayview Station wouldn’t have enough capacity, and that Portage delivers passengers more directly to the Ottawa Central Business District.

It does remain on Ottawa’s proposed Stage 3 rail transit map (look for the short purple line in the centre of the map below, connected to Bayview) but without any indication of how it would be used and how it would connect into the existing rail lines. 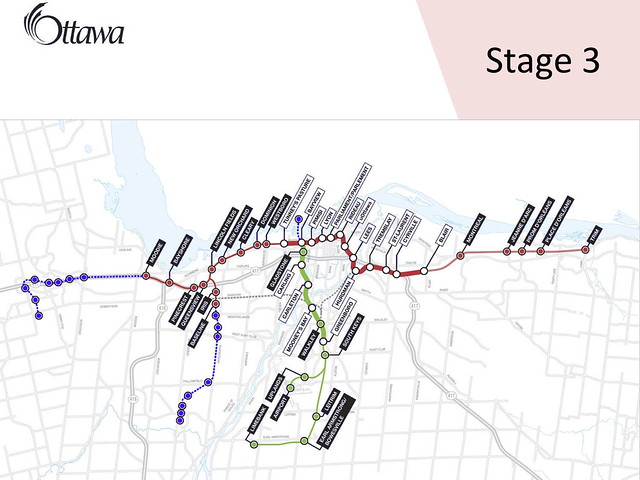 from slide 109 of the Stage 2 Light Rail Transit Project: Technical Briefing – February 22, 2019 (PDF, Internet Archive) – Stage 3 extensions to Kanata, Barrhaven and across the Prince of Wales Bridge in purple

The only other faint possibility of it ever being used for rail is an STO speculation that it could be a “Potential future link for a west-south route” (following the completion of the proposed Gatineau west-end transit project).  Note that I have changed the colours in the map below to align with more common Ottawa usage. 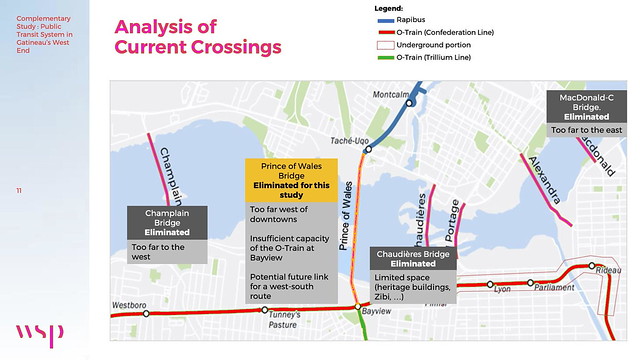 From slide 11 in STO’s Complementary Study: Public Transit System in Gatineau’s West End – Technical Briefing to City of Ottawa May 15, 2020 (PDF) on STO webpage Update: Progress of the analysis of options for the integration in Ottawa.

So for any possible rail use of the Prince of Wales Bridge you’re into the 2030s timeframe, a decade or more from now.

The current plan is to adapt it for pedestrians and cycling, but there doesn’t seem to be any money allocated for that purpose.

The city of Ottawa bought the Prince of Wales Bridge for $400,000 from Canadian Pacific Railway about 15 years ago for the express purpose of running trains across it one day, and that’s still in the city’s current Transportation Master Plan.

But last fall, the mayors of Ottawa and Gatineau announced that plans for rail over the bridge were off.

“It would congest … Bayview station, and secondly, Gatineau has been pursuing their LRT project and they too have ruled it out as a bridge that would be used for transit,” Ottawa Mayor Jim Watson said last September.

Both Watson and Gatineau Mayor Maxime-Pedneaud Jobin are hoping to use the bridge instead as a pedestrian and bike crossing.

Also see the Mayors’ joint announcement from September 2019 as reported in CBC Ottawa – Mayors rule out Prince of Wales Bridge for transit link.

For historical completeness, there was an NCC Interprovincial Transit “Strategy” in 2013 that had trains going from Bayview Station across the Prince of Wales Bridge to connect with STO transit, and also had a rail connection across Alexandra Bridge.  But it was totally unfunded so it is moot.

4 thoughts on “The future of the Prince of Wales Bridge”