On May 15, 2020 the Gatineau transit agency, the STO (la Société de transport de l’Outaouais) presented a technical briefing to the City of Ottawa about its studies into improved transit on the Quebec side that would run basically from Place du Portage to Aylmer.  There was a particular focus on how the proposed transit, previously narrowed down to include trams (streetcars) in all three options, would land in Ottawa (the language used is Options d’insertion à Ottawa which is standard French urban planning terminology that does not lend itself to a literal translation).

This is about a tram that would cross Portage Bridge from Gatineau to Ottawa and is proposed to deliver passengers somewhere along Wellington Street or Sparks Street, at least as far as Lyon Station, but possibly as far as Parliament Station or even farther east.

Note that this system is nowhere near being funded and approved yet.

There is an STO press release in French only:

The City of Ottawa also did press releases:

I have to say you would be hard pressed to understand exactly what is being proposed from the Ottawa press releases. The STO one is not super clear on the Portage Bridge part, although it does make the two options for landing in Ottawa clear: either on the surface along Wellington Street, or in a tunnel under Sparks Street.

Rather than burying the lede, here’s the key slide from the STO presentation: 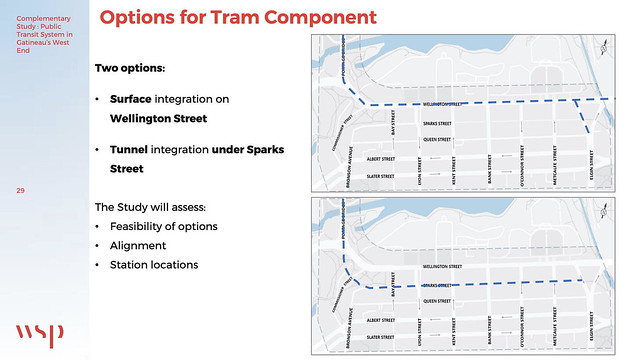 From slide 29 in  STO’s Complementary Study: Public Transit System in Gatineau’s West End – Technical Briefing to City of Ottawa May 15, 2020 (PDF) on STO webpage Update: Progress of the analysis of options for the integration in Ottawa.

These two slides from the May 2020 presentation sum up their analysis: 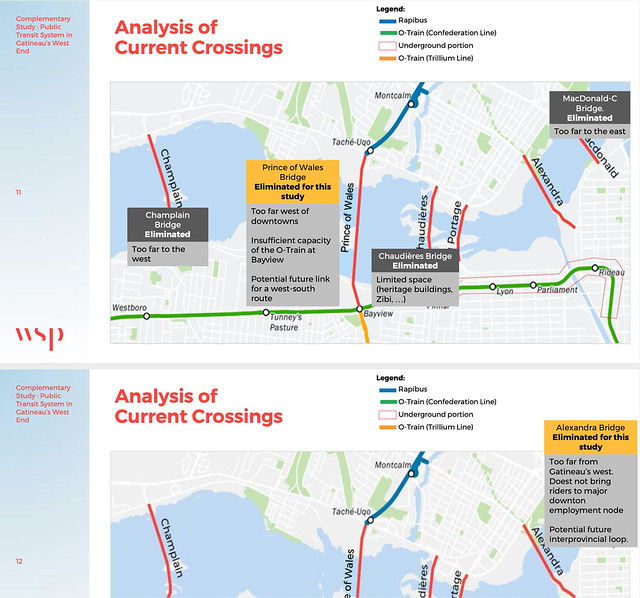 From slides 11 and 12 in STO’s Complementary Study: Public Transit System in Gatineau’s West End – Technical Briefing to City of Ottawa May 15, 2020 (PDF) on STO webpage Update: Progress of the analysis of options for the integration in Ottawa.

As seen in this slide from the January 30, 2020 update (presentation available in French only), STO’s study recommends a tramway because the bus-only options don’t have enough capacity for a scenario of 7,000 – 7,500 riders per peak hour over the next 15 years.  Also note that to meet that projected demand they’re planning for a future with a tram every 2.4 minutes. 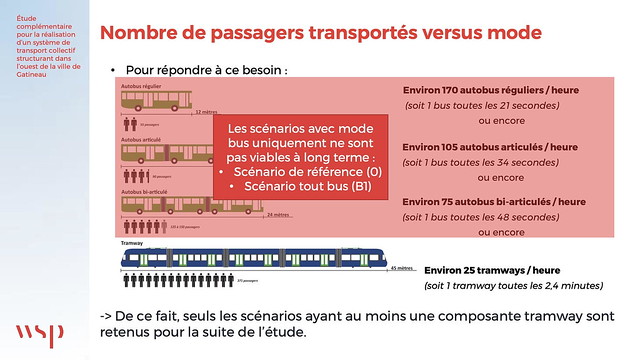 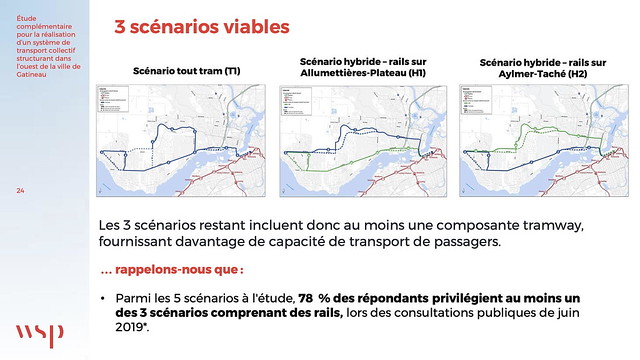 STO and City of Ottawa Information

The STO presentation is available:

The City of Ottawa info is very high-level and basically just tells you to read the STO webpages.

You can watch a recording of the briefing on YouTube.  Note that it’s a Zoom meeting so there is a lot happening on screen sometimes (multiple video windows).

June 2020: On-line public consultation for Ottawa and Gatineau.  Until then, email contact addresses are available:

I couldn’t resist bringing forward this comparison from my first blog post in this series, showing that the proposed new rail infrastructure echos rail infrastructure we already had and tore up.  The earlier STO map I have chosen shows rail options across either Prince of Wales or Alexandra, which emphasizes in a way that they both used to be rail bridges (Portage was never a rail bridge).

If you put the proposed Gatineau (orange) and Ottawa (red) commuter rail map up against the rail that existed in a map from the Greber Plan (all the black lines on the second map below), it’s pretty striking that with the tracks curving along either side of the river we’re trying to recreate some of what already existed. (You can literally still see the ghost of the old rail line to Aylmer in the curve of what is now a vehicle road by the river.) 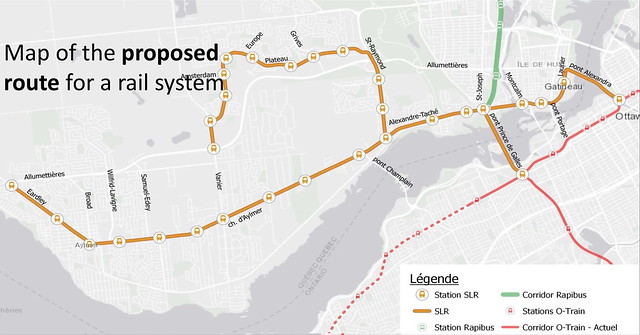 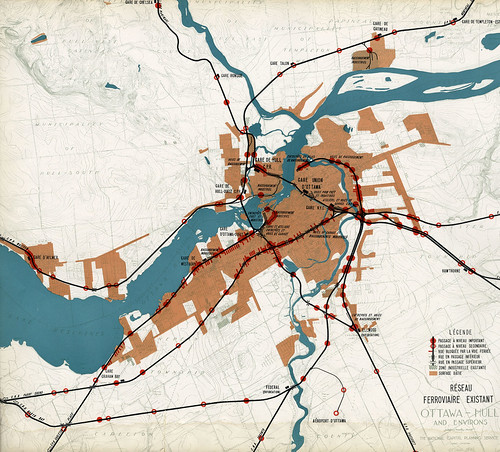 Above from Greber Plan: Plate 12 Réseau Ferroviaire Existant Ottawa – Hull and Environs 1948 as made available on the Town and Crown website, 1950 Plan for the National Capital: General Report (Greber Plan) – List of Plates Contained in the Atlas.

If you want to find out more about the various (unfunded) proposals for using the bridge, see my post The future of the Prince of Wales Bridge.

I’ve done three previous blog posts related to the Gatineau west-end rapid transit proposal, with a lot of detail about the history of interprovincial rail including old photos and videos:

Check with the City of Gatineau and the STO website for updates and for the official word on the specific rail line routes and stations for Gatineau west-end rail.