Gatineau is in a multi-stage process to study a system for transit in the west end of the city, and ultimately recommend which system to implement.  I have written previously about the initial report in proposed Gatineau west-end rail project.

In French this project is called un système de transport collectif structurant dans l’ouest de la ville de Gatineau. This doesn’t translate exactly to English because of the concept of “structured transit”; basically it means something like an organised, primary system of transit for the west end of Gatineau.

Note that this system is nowhere near being funded and approved yet.

They examine many options including all-bus and all-tramway but the summary is that the first option proposed is two connected rail lines, running trams (streetcars) presumably not separated from regular car traffic, from the west end of Gatineau across the Portage Bridge to Ottawa. 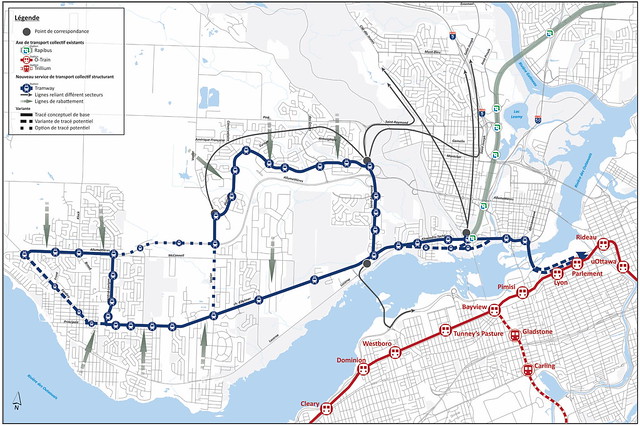 UPDATE 2020-05-17: The STO released an update on January 30, 2020 saying that the study had narrowed down to three options, all of which included a tramway, and indicated that an additional study would be conducted on those three options.

The 3 scenarios still on the table all have a tram component: the “all-tram” scenario, and the two “hybrid” scenarios. It should be noted that a tram offers close to seven times the capacity of a regular bus, being able to accommodate large numbers of riders as soon as it becomes operational, as well as new ones in the future. …

The additional study now involves comparing the last 3 scenarios in order to identify the one that is to be recommended from a technical point of view.

The January 2020 press release is accompanied by an update page, and a presentation (in French only):

On May 15, 2020 the STO presented a technical briefing to the City of Ottawa.  For more on this briefing see blog post proposed rail transit for Gatineau west end – May 2020 update to City of Ottawa.

That being said, transit funding in Canada is highly political, so there may be many more twists and turns before a final project is approved and fully funded.

Portage Bridge instead of Prince of Wales

CBC reports the analysis as

In a presentation Tuesday, the STO said the Portage Bridge would provide better service to downtown Gatineau, and would also allow the agency to drop off its users at Ottawa’s downtown Lyon or Parliament stations, which may have more capacity.

UPDATE 2019-09-25: STO has done five videos about different aspects of the plan.  I will highlight just the one about the decision about where to cross the river, which discusses the pros and cons of each crossing.

The specific text about the Prince of Wales bridge is

If the Prince of Wales Bridge were chosen to be part of the structuring system, riders going to Ottawa would have to transfer to Ottawa’s light rail at Bayview station.

However, the light rail section between Tunney’s Pasture and Lyon stations will be the busiest along the Confederation Line. There would not be enough space to accommodate all riders coming from Gatineau.

From this aspect, the Prince of Wales Bridge does not meet the needs of the current study and has not been retained. However, its use is still relevant for a secondary link between Ottawa and Gatineau.

UPDATE 2020-05-17: I’ve also written a bit more about The future of the Prince of Wales Bridge, to cover the various proposals which either see rail never returning to the bridge, or don’t see rail on the bridge for a decade or more.  END UPDATE

Unfortunately, while bringing rail across Portage is a potentially bold transit move, it is fraught with challenges, particularly given the real geometry of the area, since Portage is not just a north-south river bridge, it also has a major east-west connection from the Sir John A. MacDonald “Parkway” (highway) on the Ottawa side. 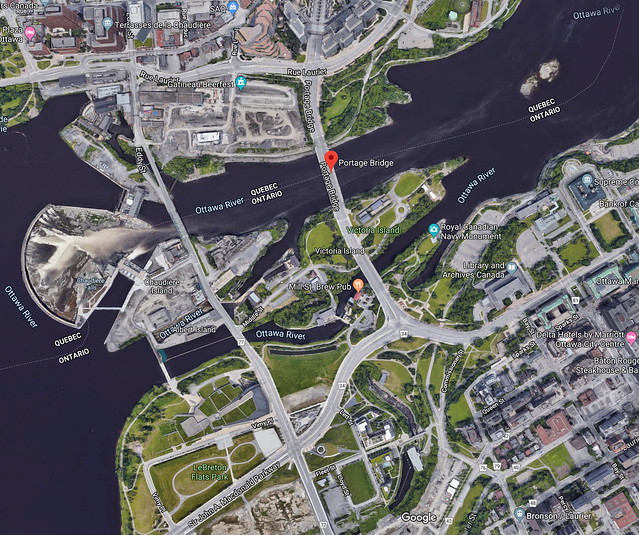 Streetcars are a pre-automobile technology.  They can work in the 21st Century when all modes of transportation and the street design combine to enable the uninterrupted movement of the high-capacity streetcars  In its comparison of modes, STO shows 45-metre-long tram cars with a capacity of 375 people.  To be blunt, that means the tram should have 375x the priority of a single-occupancy car.  But in reality in North America we have:

This means streetcars have really struggled in mixed traffic in North America.  This is why Toronto had to do the King Street changes, in order to reduce the ability of a single-occupancy car to block a streetcar carrying many more people.

To somehow insert a streetcar into Wellington and Portage’s mix of north-south and east-west traffic would be a huge challenge.  Just look at that intersection.  And keep in mind the vehicle they’ve depicted is 45 metres long, much much longer than an 18 metre extended (bendy) bus. 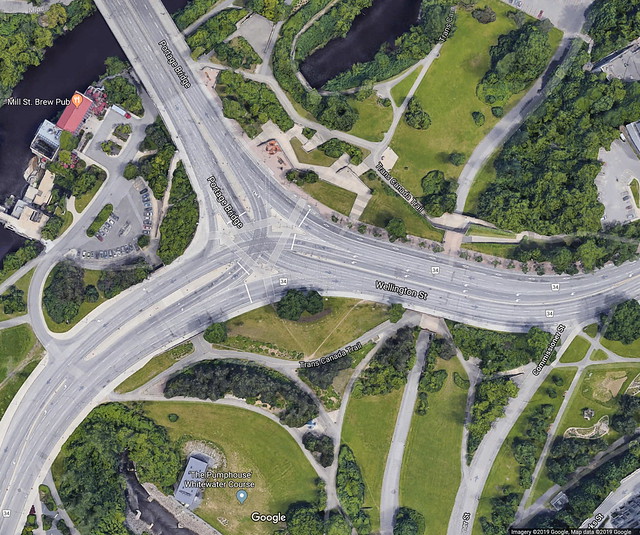 And then it’s not at all clear to me how you land the tramway in downtown Ottawa.  It’s supposed to deliver its hundreds of passengers per vehicle to Lyon Station and the sidewalk basically.  There’s no way geometrically (that I can see) that you can get the tram around 90 degrees to Lyon and Queen (and incidentally up a bit of a hill), so I guess that means it just stops at Lyon and Wellington?  (STO actually talks about serving both Lyon and Parliament Stations.)  STO just shows some magic dotted lines once the tramway arrives in Ottawa. 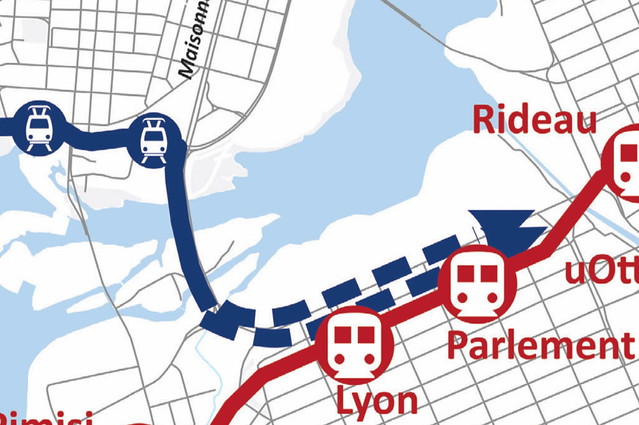 I’m not saying this is a bad idea.  If we were in Europe it would be easy.  European trams cross multi-modal bridges all the time, here’s one in Rouen. 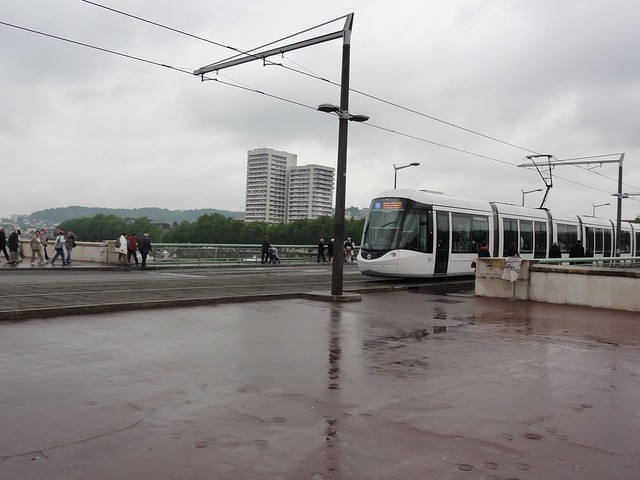 But doing this in North America with the real geometry of the proposed location and the real behaviours of North American drivers will be a big challenge.

SIDEBAR: The entire area is a museum of 1960s traffic engineering and urban planning.  To the west you have the “urban renewal” of LeBreton Flats, where housing was flattened and a highway was built, and to the north across the river you have the Place du Portage megastructure, where an urban street grid was erased in order that an inward-facing building complex could be dropped out of the sky, a building complex you’re supposed to arrive at by car and never leave until the work day is done.  For more on that era’s disastrous urban design see William H. Whyte’s City: Rediscovering the Center, in particular chapter 14, Megastructures.  END SIDEBAR

There’s way way too much information for me to expand out in detail so I’m mostly just going to point you to the STO web pages.

The area under study comprises Gatineau’s west end, downtown Gatineau, downtown Ottawa, the light rail stations and their surrounding areas as well as suitable routes for linking Gatineau and Ottawa.

There was a 2013-2017 Opportunity Study that you don’t really need to know much about.

Out of that, as far as I can tell, came the 2018 proposed Gatineau west-end rail project.

And in June 2019 sub-step Public Consultation on the Structuring System in Gatineau’s West End.

In the June 2019 consultation they want you to consider 5 scenarios.

I’m only going to include the slides about the all-tramway scenario.

The tramway depicted by STO is 45 metres long and carries 375 people. 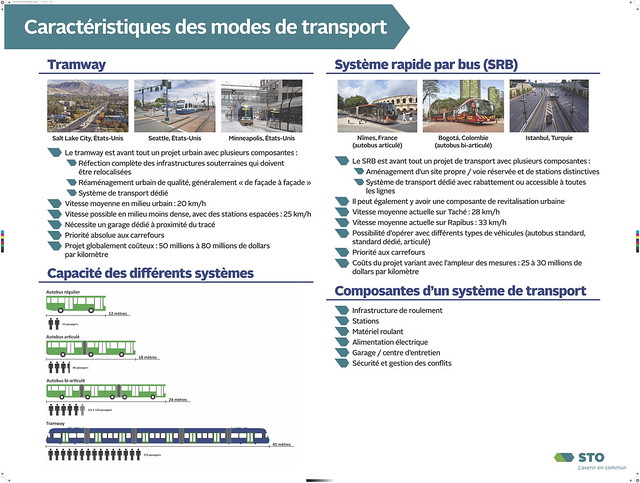 That’s much, much longer than the familiar OC Transpo articulated (bendy) bus which STO shows as the second green bus at 18 metres and a capacity of 90 people (I’m not sure how the half-person depicted works, but anyway you get the idea).

You can see the full map of the proposed routes with alternatives. 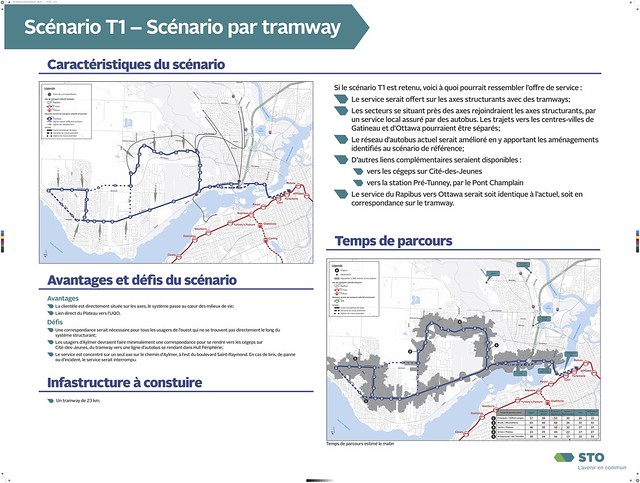 from Scénario T1 – Scénario par tramway (PDF). Note that the maps do not show Prince of Wales Bridge crossing the Ottawa River.

UPDATE 2019-06-04: There are now videos available explaining the scenarios

and there is now an FAQ

You can also read the press release (in French only)

and watch the video of the announcement (in French only)