As a reminder, there are two lines:

Line 1 extends east to Trim Station, but on the west side it splits, with part heading west and part turning south.  Line 2 adds stations and continues south, but then takes a rather dramatic turn to the west at the end of line.

In terms of implementation, the project is separated into three separate parts for the east and west (Line 1) and south (Line 2) extensions.  You can see the planned system in this Stage 2 map, including a Line 1 extension that was added in the west to Moodie Station and the new west turning to Limebank Station at the end of Line 2.  Below map from Stage 2 – Where (Internet Archive copy). 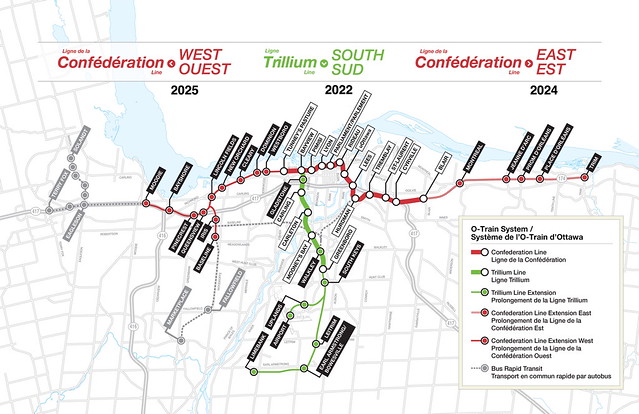 (I added the dates.)

Black circles with black text boxes are new stations, and the new segments are also shown as thinner.  On the green line (Line 2), two stations are added within the existing Stage 1 segment: Gladstone Station and Walkley Station.  Line 2 also gets an extension to the airport, but my understanding is that this is not a direct train; you have to change to an airport shuttle train at South Keys Station.

Note that bus rapid transit (the remainder of the Transitway buses) is shown in grey.  (See update below for new timelines.)

See all of the information sessions at https://ottawa.ca/en/planning-development-and-construction/major-projects/stage-2-light-rail-transit-project/project-updates/stage-2-lrt-information-sessions

UPDATE 2018-02-24: A detailed technical briefing including updated timelines, budget, and the selected private sector implementation groups will be presented a Committee of the Whole special meeting of Council on February 27, 2019 at 1pm.

The documents are available in the city’s SIRE agenda system.  There are two agenda items:

The report ACS2019-TSD-OTP-0001 Contract Award of Ottawa’s Stage 2 Light Rail Transit Projects and Related Matters (PDF) has nine appendices of which the most interesting for me was Appendix 5: Station Descriptions and Technical Overview (PDF) which includes renderings of all the new Line 1 and Line 2 stations.

There is a very-high-level summary in city news release City holds technical briefing on Stage 2 LRT and the Preferred Proponents.

Stage 2 is made up of two projects extending the Confederation and Trillium Lines totalling 44 kilometres of new rail and 24 new LRT stations.

The marquee information is: 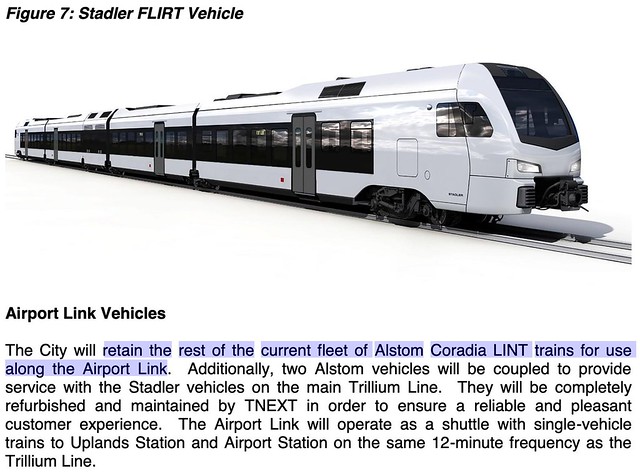 The Stage2LRT website has also been updated, although not particularly intuitively.

UPDATE 2019-12-11: The entire Stage 2 website (stage2lrt) now redirects to the City of Ottawa website.  This means a lot of sections and links from the Stage 2 website are now broken.  I will repair as many links as I can using the Internet Archive.

There is a new News item (the same as on the city’s main website):

BUT this news item doesn’t link to the new Stage 2 LRT documentation, which can be found on the Resources page, specifically at the bottom of the resources page.  (If they’d wanted to make it any harder on to find, they could have put a sign on the door saying ‘Beware of the Leopard.”  Kudos to Skyscraper Page forums for finding it for me.)

The technical briefing includes a much clearer Trillium Line (Line 2) train diagram.  Note that our FLIRT trains will have two sets of doors per car, not one set as in Figure 7 above. 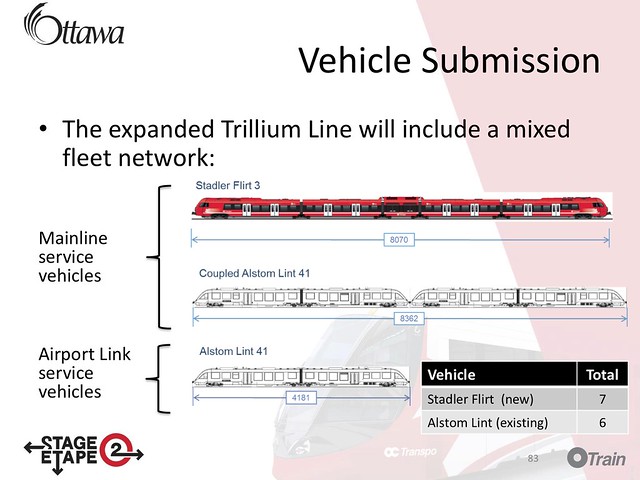 The details of the plan to extend Line 2 west are available in the Trillium Line Extension Planning and Environmental Assessment (EA) Study – Addendum.

I’ll only look at the end of the line, which is a change to the original Stage 2 plan. 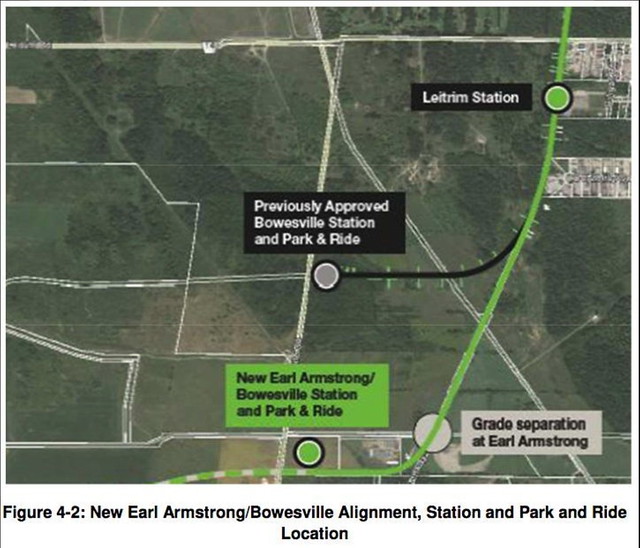 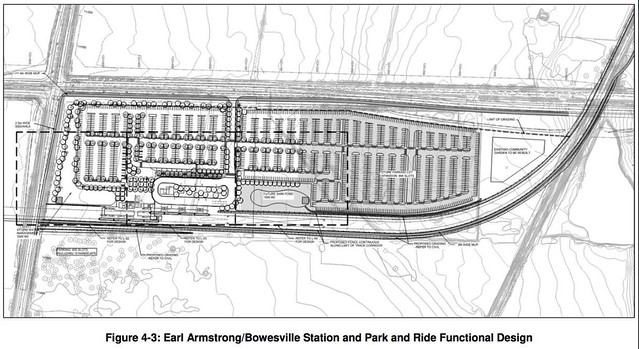 Above two images are from pp. 68-70 of the Trillium Extension EA Study Addendum document (PDF).

Here is the extension west to Limebank Station 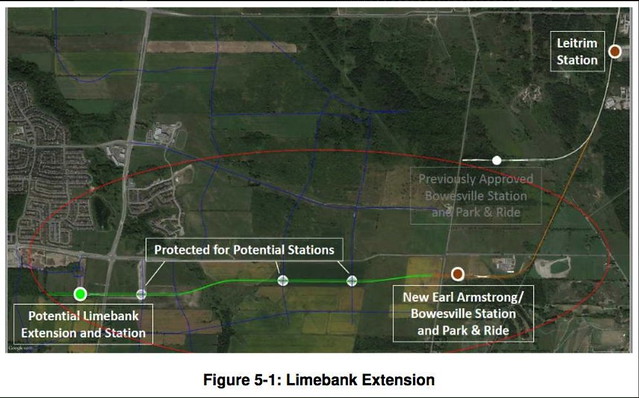 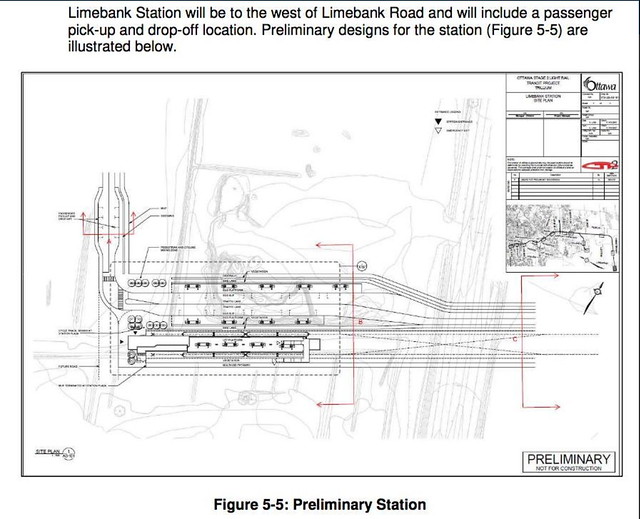 Above two images are from pp. 93-99 of the Trillium Extension EA Study Addendum document (PDF).

In Stage 2 the existing Line 2 trains will be replaced with the Stadler FLIRT (Fast Light Innovative Regional Train).  It is diesel powered but can be converted to electric. 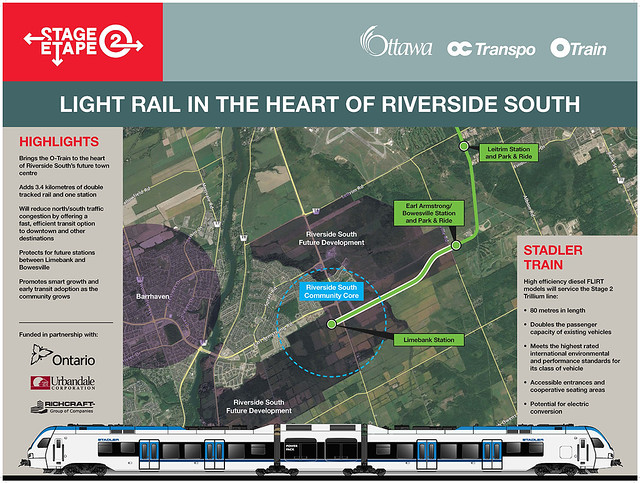 Above from City secures funding to extend O-Train Trillium Line to the heart of Riverside South.

UPDATE 2019-10-07: There is also a lot of information on the City of Ottawa website in the major projects section, including station renderings.  https://ottawa.ca/en/planning-development-and-construction/major-projects/stage-2-light-rail-transit-project  END UPDATE

UPDATE 2019-12-11: The entire Stage 2 website (stage2lrt) now redirects to the City of Ottawa website (see link above).  This means a lot of sections and links from the Stage 2 website are now broken.  I will repair as many links as I can using the Internet Archive.

UPDATE 2019-10-07: There is an interactive map available on the City of Ottawa website.  You can zoom in to see details, as well as click on individual stations (red circles) to get more information.  Thanks to Mapping Ottawa’s LRT on The Map Room blog for this information.  END UPDATE

You can see Stage 2 track alignments in GeoOttawa.  Go to More layers… and select Rail Implementation Office at the very bottom (below Miscellaneous).  http://maps.ottawa.ca/geoottawa/  Note that GeoOttawa requires Flash.

Stage 3 may extend to Kanata, to Barrhaven, and possibly across the Prince of Wales bridge to Quebec.  Details are not finalised; I have done a separate blog post with Stage 3 maps.