Here’s what the Stage 1 commuter rail (light rail transit, LRT) network looked like when it launched on September 14, 2019.  This post focuses on the rail maps; there were also lots of bus route changes.

Line 1, the Confederation Line, the red line, runs from Tunney’s Pasture Station in the west to Blair Station in the east.  It is an all-electric, dual-track line (i.e. separate tracks for each direction).

It makes for a pretty simple map, from the OC Transpo Ready4Rail – Where will it go page.

Line 2, the Trillium Line, the green line, runs from Bayview Station in the north to Greenboro Station in the south.  It is a diesel line with some single tracking, which means trains have to wait at stopping points in order to share the single track in both directions. 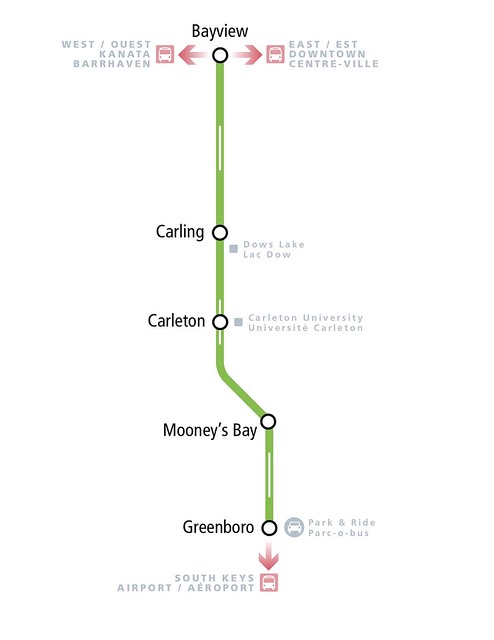 The lines have a single transfer point at Bayview Station.

Here is a Stage 1 map of just Line 1 and Line 2 together. 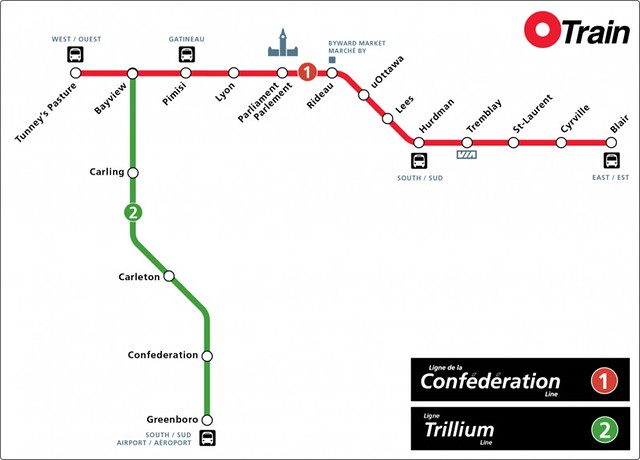 There is also a map (PNG) that shows all rapid routes, which includes the two train lines in red and green as well as buses in blue. Basically the blue is what remains of the workhorse Transitway / Bus Rapid Transit (BRT) lines in Stage 1. (Map from OC Transpo New service types page.)  You don’t see the downtown core buses on this map because they are a different service type, downtown buses are frequent and their routes would be in orange. 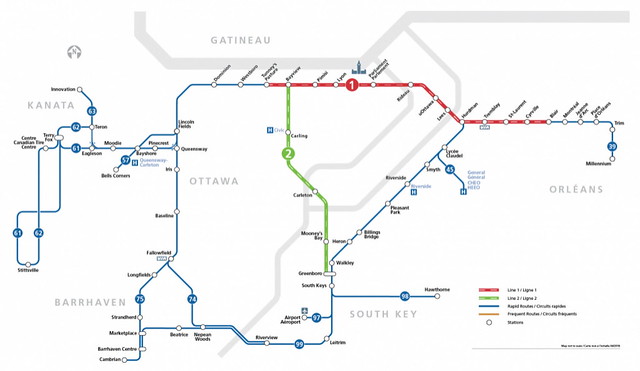 You can see current and proposed station footprints and track alignments in GeoOttawa.  Go to More layers… and select Rail Implementation Office at the very bottom (below Miscellaneous).  http://maps.ottawa.ca/geoottawa/  Note that GeoOttawa requires Flash.

UPDATE 2020-07-03: geoOttawa beta is available and works in any web browser.  END UPDATE

If you want the data for Line 1 including station alignments, as shape files, you can get it from the City of Ottawa Open [Data] site https://open.ottawa.ca/datasets/o-train-line-stage-1

There is also open data for O-Train [Line 1] Stations Stage 1 (just the stations) and O-Train [Line 2 Tracks] (just the tracks), including Google Earth KMZ format.  The data are quite fragmented as they are mostly just extracts made by querying GeoOttawa.  Use the API Explorer option on the individual datasets in Open Ottawa to see the query that generated the dataset.

The website for the construction of Stage 1 was https://www.ligneconfederationline.ca/ (now that construction is complete, the website will no longer be updated).

There is also general information at https://www.octranspo.com/en/ready-for-rail/

and a specific OC Transpo page for Line 1 at https://www.octranspo.com/en/our-services/bus-o-train-network/service-types/o-train-line-1

There was a completely separate website for Stage 2 but now see the City of Ottawa website at https://ottawa.ca/en/planning-development-and-construction/major-projects/stage-2-light-rail-transit-project (I have covered Stage 2 in a separate blog post).

In renaming and rebranding the lines there may be some confusion.  Previously O-Train referred just to the north-south train, now it is used for the entire system.  Also previously route 1 and route 2 were downtown core frequent buses.  Route 1 was changed to route 6, and route 2 basically ended up as two routes, the 11 and the 12.

The Stage 1 rail lines won’t change, but nevertheless always go to the OC Transpo website for the latest official information about routes.