Some reflections on Infinity War and the Marvel Cinematic Universe.  Lots of spoilers.

Star Trek II: The Wrath of Khan is a movie about consequences.

Heroes usually have the luxury of avoiding consequences, as they go from episode to episode always succeeding. Star Trek II is quite explicitly about how Kirk has avoided consequences for his entire life, starting with him beating the Kobayashi Maru scenario at Starfleet Academy.

David: Lieutenant Saavik was right: You never have faced death.
Kirk: No, not like this. I haven’t faced death. I’ve cheated death. I’ve tricked my way out of death and – patted myself on the back for my ingenuity.

In Star Trek II the consequences all come at once, whether it is a long-forgotten enemy or a son.
And in the end, the ultimate consequence, the death of Spock.

Which, in usual Heroic fashion, turns out to be reversible in Star Trek III: The Search for Spock.

James T. Kirk: [Looking up from the planet surface to see the remains of the Enterprise burning in the atmosphere] My God, Bones, what have I done?
Leonard McCoy: What you had to do, what you always do. Turned death into a fighting chance to live.

Sarek: But at what cost? Your ship. Your son.
James T. Kirk: If I hadn’t tried, the cost would have been my soul.

I have to say that Star Trek II & III are rather more elegantly and clearly about these philosophical questions and about the consequences of a lifetime of heroic actions, but these ideas nevertheless are in Infinity War and (presumably) will emerge in Part 2 as well.

END_OF_DOCUMENT_TOKEN_TO_BE_REPLACED

In ROT13 because spoilers.

Wikipedia is constantly changing, including editors who are very keen to delete content and tell you “wikipedia is not …”

In the version of the Satchel article on Wikipedia at the time of this writing, many of the cultural context references have been removed, although a restored section with the Indiana Jones, Hangover and Guardians of the Galaxy references is surviving.

UPDATE 2018-05-17: There is a single anonymous user who, apparently not content with having already removed thousands of characters worth of the article, has again returned to remove the “In Popular Culture” section, again.  The user’s edit history shows a consistent focus on removing popular culture references from articles.  END UPDATE

Below is an earlier version of the article with more extensive references. (I will admit that not every single cultural reference in the version below is needed.)

As a side note, I think, but was unable to confirm, that references to satchels in the 19th century may be actually be something more like a Gladstone bag.

From Wikipedia, the free encyclopedia, using Creative Commons Attribution-ShareAlike License (for this blog posting only).
For other uses, see Satchel (disambiguation). 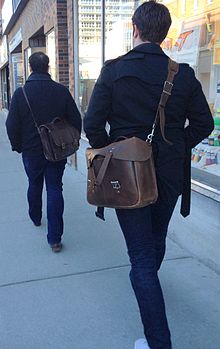 A satchel is a bag, often with a strap.[1] The strap is often worn so that it diagonally crosses the body, with the bag hanging on the opposite hip, rather than hanging directly down from the shoulder. They are traditionally used for carrying books.[2] The back of a satchel extends to form a flap that folds over to cover the top and fastens in the front. Unlike a briefcase, a satchel is soft-sided.

A carriel is “a small leather satchel from Colombia with a long history dating back 400 years”.[3]

A photo from the Bain News Service shows Camille Saint-Saëns carrying a satchel in the United States in 1915.[4]

Letter carriers in many countries carry a mail satchel.[5]

The traditional Oxford and Cambridge style satchel is a simple design that features a simple pouch with a front flap. Variations include designs with a single or double pocket on the front and sometimes a handle on the top of the bag. The classic school bag satchel often had two straps, so that it could be worn like a backpack, with the design having the straps coming in a V from the centre of the back of the bag, rather than separate straps on each side.[citation needed] This style is sometimes called a satchel backpack.[citation needed]

A cover illustration from The Queenslander Illustrated Weekly on January 31, 1929 shows a school bag taunting a schoolboy.[6]

There is an example of a schoolboy’s satchel in the collection of London’s Victoria and Albert Museum.[7]

The school satchel is described as “the bag of choice for 1950s children”.[8]

A 1959 photo shows schoolgirls with satchels (schooltassen) in the Netherlands.[9]

The use of school bag satchels is common in the United Kingdom, Australia, Western Europe and Japan.[10] In Japan the term for a school bag satchel is randoseru. The Unicode for the school satchel Emoji is U+1F392.[11]

In cases where the school bag is a hard-sided box, it is a briefcase rather than a satchel.

Much of the popularity of the satchel as a fashion accessory in the United Kingdom, the United States of America and Canada since 2008 is driven by the Cambridge Satchel Company, whose product was on a Guardian gift guide in 2009, and was described as a cross-body bag in a 2010 article.[12][13][14][15]

In literature, the satchel is often associated with the classic image of the English schoolboy: “And then the whining school-boy, with his satchel” is a phrase from Shakespeare’s monologue All the world’s a stage.

In Mark Twain’s 1869 travel book The Innocents Abroad he reports that upon arriving in France in 1867, “With winning French politeness the officers merely opened and closed our satchels”.

In the Little House on the Prairie novel By the Shores of Silver Lake, the Ingalls family carries two satchels on their train ride west.

Indiana Jones always carries a satchel as part of his outfit, alongside his whip and hat (the prop used in the movies was a 1943 Mark VII gas mask bag).[16]

The satchel is referenced in the movie The Hangover, where the character Alan Garner says “it’s not a man purse, it’s called a satchel. Indiana Jones wears one.”[17] The bag he was actually carrying was a Roots Village Bag.[18] Following the attention due to the movie, Roots released a larger bag, called simply The Satchel, however the design of both the Village Bag and The Satchel are not the same as the traditional satchel.

The satchel is indirectly referenced in the nod to both Indiana Jones and The Hangover in the movie Guardians of the Galaxy, where the character Peter Quill says “It’s not a purse, it’s a knapsack.”

In Shaun the Sheep Movie the eponymous sheep has a satchel with a Blue Peter badge on it.[19]

In Kiki’s Delivery Service, Kiki carries a satchel when she leaves home.

In My Neighbor Totoro, Satsuki Kusakabe, her friend Michiko and other school children can be seen wearing satchel backpacks as they go to school.

In season 3 of Glee, Blaine Anderson carried a buckle-detail satchel.[20]

In The Big Bang Theory, Dr. Sheldon Cooper is seen carrying a brown satchel (reported to be a distressed-canvas Goorin Brothers bag).[21]

In Stargate SG-1 season 8, Dr. Elizabeth Weir is seen with a satchel behind her desk and later on her desk, in the two-part episode “New Order“.

In The Captive Prince by Scott Chantler, Topper says “I think I’m going to need a bigger satchel.”

Ford Prefect carries his gear in a satchel in The Hitchhiker’s Guide to the Galaxy.

It’s not common, but sometimes a movie can be better than a book. Clearer, more focused, or just reimagined.

It’s pretty hard to compare Jumanji by Chris Van Allsburg to the the 1995 movie, as Jumanji is a short kid’s picture book. The core ideas are in the book, but basically the entire storyline of the movie with the town and the kids is added. It made a pretty good movie.

This is a whole other universe that I will mention but not explore. Pretty much every major science fiction and fantasy movie that didn’t originate as a book has a book adaptation. Sometimes they illuminate or give a different view of the story. For example E.T. (E.T. the Extra-Terrestrial in his adventure on earth) by William Kotzwinkle in 1982 has rather more Dungeons and Dragons than you might expect. And continues into its own (not very good) 1985 sequel E.T. The Book of the Green Planet.

These are books that are better than the movies made from them.
It is a big challenge to take the complex, lengthy and often internal dialogue of a book and transform it into a short visual representation.

The Hobbit by J.R.R. Tolkien – It’s unfortunate that, having done a masterful job on The Lord of the Rings, Peter Jackson messed up The Hobbit (2012, 2013, 2014) by trying to turn this simple tale into an epic. Tolkien himself had revisited The Hobbit after The Lord of the Rings but abandoned the rewrite, finding that trying to make Hobbit more like the Rings took away from the integrity of the story. I look forward to a remake that gets it right.

The Golden Compass by Philip Pullman – This is great as an audiobook. It could have made a good movie, but instead The Golden Compass (2007) went very heavy into the church side of things, and basically didn’t do justice to the book.

Stardust by Neil Gaiman – This is a good audiobook, read by the author. I don’t remember the 2007 movie that well, but it didn’t capture the book.

Ender’s War by Orson Scott Card – This is probably unfilmable as written, but nevertheless the core of the story is the practice battles that they fight, which the 2013 movie failed to capture.

Howl’s Moving Castle by Diana Wynne Jones – I don’t really remember much about the movie, but I recall the 2004 movie failed to capture the book.

Contact by Carl Sagan – Turned into a very USA religion versus science 1997 movie, which is not at all the nature of the book.

Hitchhiker’s Guide to the Galaxy by Douglas Adams – I find the book better than both the original radio drama and the movie, because of Adams’ gift with written language. The humour of a line like “The ships hung in the sky in much the same way that bricks don’t.” is hard to replicate in audio or film.

Harry Potter and the Prizoner of Azkaban by J.K. Rowling – I like this as the Stephen Fry audiobook. The first two movies directed by Chris Columbus had a good visual sense of Hogwarts and the students, in particular the importance of the house colours and a special school with a uniform. The third movie by Alfonso Cuarón in 2004 tried to do some grand theme about time and lost all of the visual sense and the understanding of being away at a special school, trying to make it just ordinary kids.

But Still a Good Movie

The Princess Bride by William Goldman – This is an example of a book that takes full advantage of literary techniques, including a lot of author asides. It is a very funny book. It made a good movie, but the movie couldn’t capture all the complexity and technique of the book.

The Martian by Andy Weir – The book is funnier than the movie, and the book has the luxury of being very highly technical, which wouldn’t have been feasible in the movie. Still a good movie though.