NOTE: This information is from 2015 and is almost certainly out-of-date.

UPDATE 2017-03-17: SNCF has announced that it will discontinue iDTGV as a separate brand with separate booking.  See e.g. iDTGV brand to disappear.  ENDUPDATE

iDTGV can be booked from its own website or app, which has the advantage of offering seat selection, or through voyages-sncf, which I gather doesn’t.

It has two types of “zone”, basically a quiet one (iDZEN) and a family/louder one (iDZAP).  See http://www.idtgv.com/en/idservices/idzen-and-idzap  It also has two classes, but in my experience it’s not worth getting 1st class on French trains.

It sort-of works for booking outside of France (including a good English interface).  There are a number of issues though (and some outright bugs / website errors).

To make it work without a European credit card and French phone number:

However, having done the initial transaction and gotten your card rejected, you can email or contact form them and ask them to unblock it.  Just send them the last four digits of your card, not your entire number.  Thanks to Seat 61 for the info about credit cards.

Be aware that the iDTGV website will silently time-out if you’re idle for a while.

UPDATE 2016-04-11: It looks like iDTGV has joined a number of other apps in now only being available in the French iOS Apps Store, rather than being available e.g. in the Canadian store as it was previously.  As the easiest way to display your tickets is in the iDTGV app, this makes it less convenient.  If you have already downloaded the iDTGV app, it will continue to work.  ENDUPDATE

iDCAB is a taxi-like service for travel to and from the train station.  It’s available for quite a few of the major stations in France. 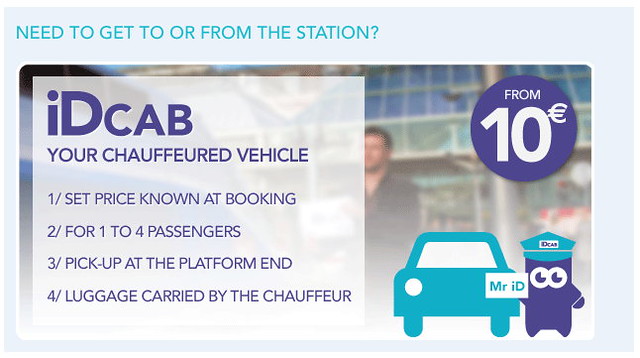 You can add iDCAB to your iDTGV booking (on the website) without any problems AFTER you’ve booked and paid for your main train trip.  However (if you have a one-way ticket at least) it appears to only offer the option for a taxi on the departure end of the trip, not the arrival.

iDCAB is not currently available as an option in the iPhone app.

Unlike the interface at iDTGV, the SNCF interface won’t give you options for how early you want to arrive or estimate travel time to the station; you have to choose your pickup time yourself.  It also won’t let you specify the number of passengers (however this doesn’t really matter as it’s a flat price regardless, up to max 4 passengers).  The price on SNCF is also higher than on iDTGV.  The SNCF interface will tell you what car service is picking you up though.

Note that iDTGV has tighter baggage restrictions than the TGV:

You can take 2 pieces of luggage for free (details below).

If you did not pay this extra charge when you booked, the payment will cost you €45 on board.

For more details, check out the full page at Seat 61: www.seat61.com/idtgv.htm