Cineplex has VIP theatres, including one at Lansdowne.  It’s an ok idea but from my perspective appears to have a fatal design flaw.

Because of the drinks, it is local legal drinking age only (e.g. 19+ in Ottawa).

So other than the 1% income inequality aspect, ok.

UPDATE 2015-12-31: Cineplex has turned off the blue seat lights, at least in the VIP Lansdowne theatre I was in yesterday.  So the primary issue reported in this blog post is now fixed.

The new theatres have some other minor distractions, but they are mostly understandable: 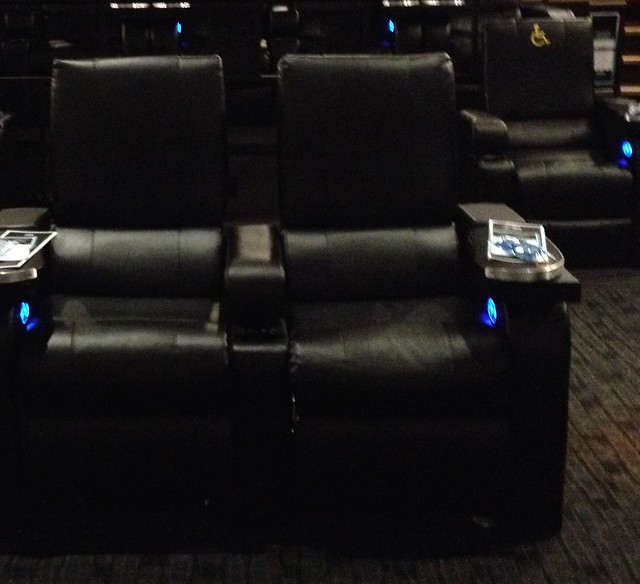 Except. Those seat controls. That glow bright blue. They never go out.  Here’s an artificially-darkened version of the above image. 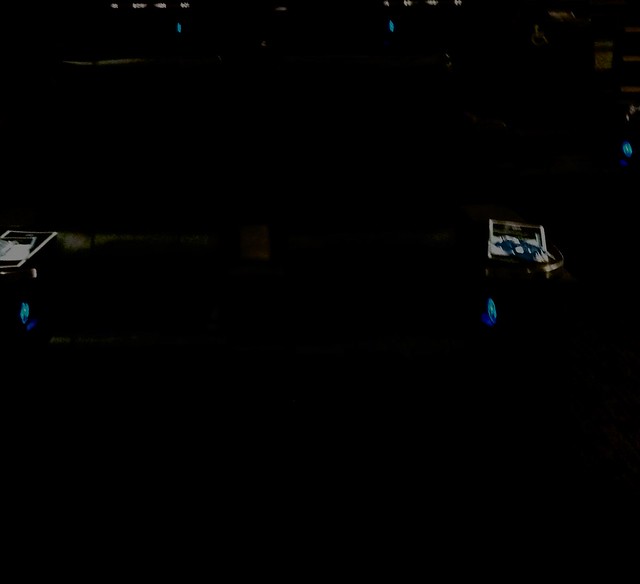 Now if it were me, here’s how I would design these seat controls:

At the absolute maximum, I might agree to a touch-activated, very very dim red illumination when the house lights are down.  So as to not distract the other guests.

These are not controls that you’re using all the time.  At most you might adjust your chair when you sit down, or just before the movie starts.  I didn’t actually see anyone using them at all.

Instead, at least in the movie I was in:

The fact they never go out might be ok if they were completely blocked from view.  But they are not.  Which means if you have good peripheral vision, you can see not just the light below you on your chair, but the lights on the chairs to the left and right of you.  Which means the entire movie experience is like this:

Maybe your ideal experience of a movie is to have the rough equivalent of someone constantly shining blue laser pointers into the corners of both your eyes, but mine is not.

As a side note, Cineplex has started an autism-spectrum-friendly screening program called Sensory Friendly Screenings, with “2D projection, increased auditorium lighting, lower volume and smaller crowds” (Autism Speaks press release, PDF).  Other than the increased lighting, this actually sounds like a better theatre experience for everyone.  The VIP theatre would be ideal for this screening program… except it seems likely that the blue lights that never go off will be a distressing stimulus.

I very much hope they are supposed to go out, but just weren’t switched off.

In any case, I really only care about the the reserved seat part, so I will be going to IMAX instead.

(Also incidentally the three one-person washrooms may be nice in theory, but mean a giant lineup at the end of the movie – go down the hall to the larger shared washrooms by the UltraAVX section.)

Sidebar: There are four VIP theatres at Lansdowne.  Cinema 3 is bigger than cinema 2.  I don’t know about cinema 1.  Make sure you check not just the show but the time posted outside the theatre (all three VIP cinemas were playing the same movie, just at different times.)