If you extend the MUP up to La Cité collégiale it comes out at just over 2.25km.

This would make Blair Station a short bike ride to and from La Cité collégiale, the NRC campus, and CSEC.  It also gives you tons of catchment from the houses on the west side of Bathgate. 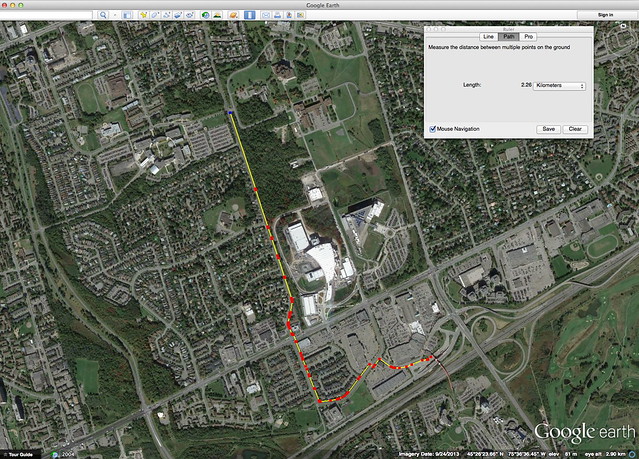 (You can ignore the dots, it’s just because I’m making straight-line segments for Google Earth to measure the path. Some of the dots indicate intersections but most are just to get the line around curves.)

One concern might be that the sidewalk that this MUP would replace may be too busy.

One way is to use Google Street View to count the pedestrians along the route.  From start to finish I count 3, although none of the new CSEC-adjacent Bathgate east sidewalk existed when they did the streetview (there were east sidewalk segments before and after that portion on Bathgate).

Another way is to walk the route.  So I took 51 photos, on three different days, at different times of day.  Here are 5 example photos.  You decide whether this sidewalk is too busy to make into a MUP. 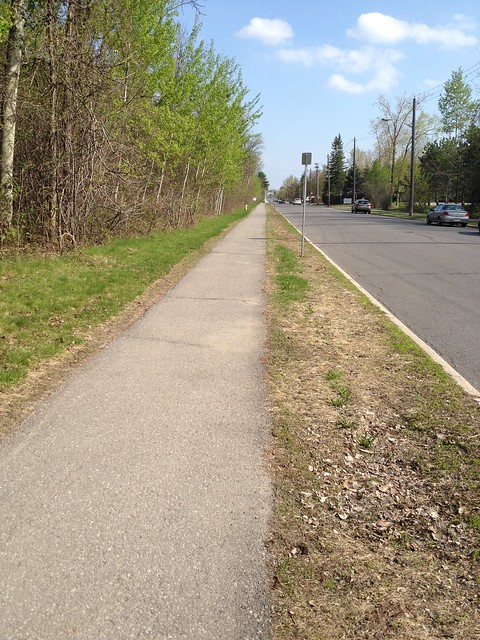 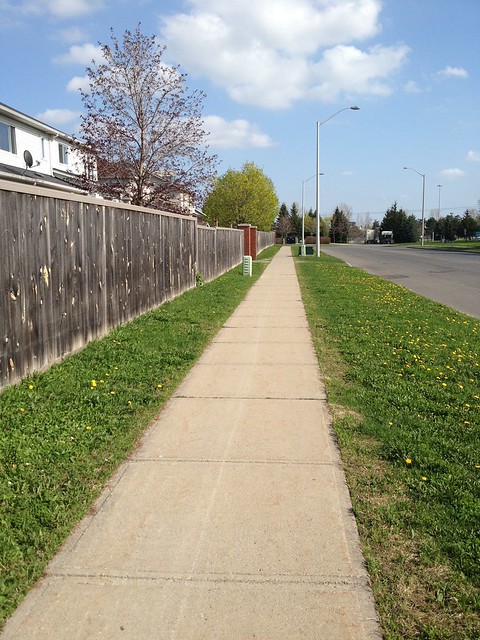 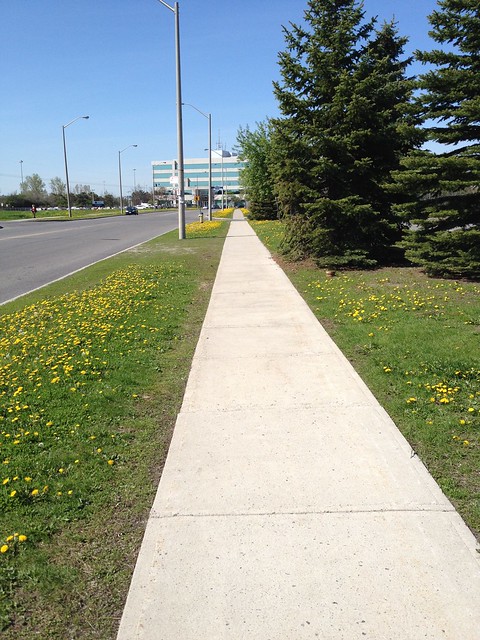 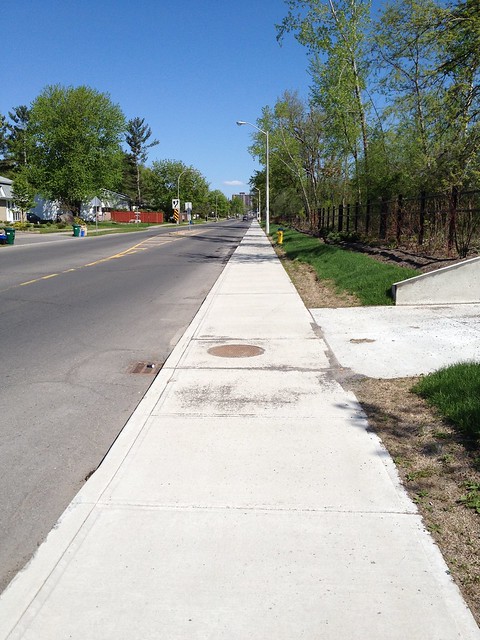 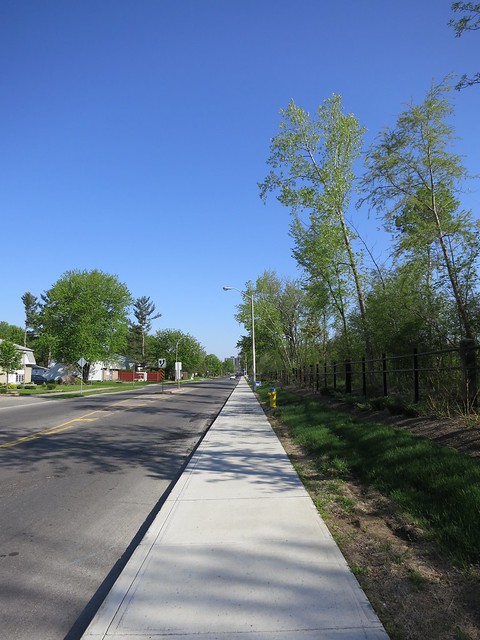 This really should have been covered in the Blair Station TOD study.  But the survey is 600m directly centred on the station, even though the access from the south means crossing the Queensway, which makes it extremely difficult and unlikely to get many sources or destinations there.  I think they should have considered the employment and school to the north of Ogilvie as destinations, since there are thousands of government employees and students going there every weekday.  Additionally they should have considered the housing north of Ogilvie as sources of transit users.  And a good cycling network would make for a much larger catchment area.

You can also see the outdated posterboards at http://documents.ottawa.ca/sites/documents.ottawa.ca/files/documents/tod_boards_24.pdf  Beware: in the June 2013 posterboards orange dots are “future on-street bicycle lane”, whereas in the Oct 2013 slide from the Nov 2013 draft, orange dots are “future dedicated cycling facility”.  Does “dedicated cycling facility” mean a separated lane?  I would hope so, but I don’t know.  The cycling on the June 2013 poster is also a different mix than the Oct 2013 draft slide below. 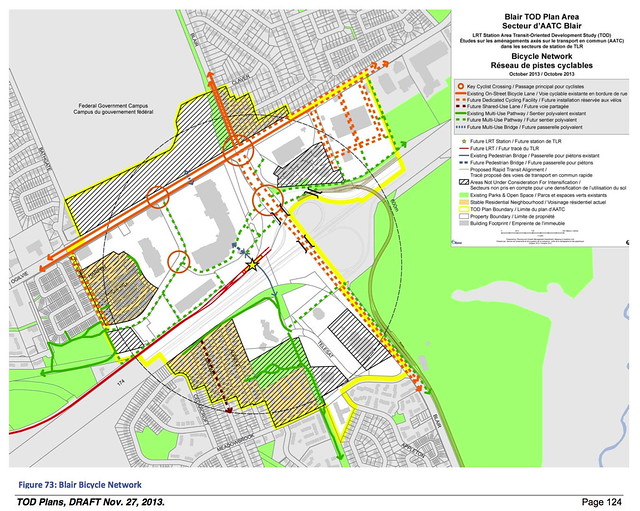 The proposal is… just not quite right.  The green dotted future MUP is on the wrong side, the south side of City Park Drive, which has many more car entrances and exits and more foot traffic.  The little strip of orange dotted dedicated cycling facility on City Park Drive north is nice, but it doesn’t connect to anything.  You go from a MUP on the south side of the street, then ??? to a dedicated lane on the east side of the street for a few metres, and then you’re at Ogilvie, which is an incredibly dangerous multi-lane speedway.

The path they want you to take, I guess, is to take a future MUP east from Blair Station to a future dedicated cycling facility on Blair, get across to the east side of Blair, ride for a few metres and then get dumped onto dangeous unprotected cycling up Blair north of Ogilvie.  This delivers no one to the school, doesn’t connect to the CSEC MUP, and has you unprotected in fast suburban traffic with lots of intersections up Blair.

CSEC is new.  The time to do an intervention for people’s travel habits is when they first start working at a new location.  That’s not me talking, that’s Dr David Halpern, Director of the Behavioural Insights Team in the UK, speaking at the Canada School of Public Service (or similar talks he’s given).  The time to put in a MUP to get people cycling from the bus and future train to CSEC is now.  Once they start driving, you will never shift their commute.

In an ideal world this should have been addressed when they spent a fortune making a bright new empty sidewalk along Bathgate Drive that connects to a CSEC MUP.

(As a side note, this MUP would greatly benefit from a large, secure bike storage area at Blair Station; additionally it would be nice if we could take bikes on the future train during commuting hours.)

The lead on the Blair Station TOD was

UPDATE: I contacted Mr. Giles and shared this blog post with him.  He provided me with more information and with thoughtful feedback.  He wasn’t able to provide the full Blair TOD as it seems the city’s systems simply can’t provide it online (this seems to be a recurring and serious issue in terms of citizen engagement with planning).

He indicated that the primary focus of the TOD plans is zoning, and to “protect pedestrian and cycling connections in the immediate station area (within 800m walk of the station platform)”.  Anything else in terms of connections is supposed to go in the Transportation Master Plan (TMP) and Infrastructure Master Plan.

He provided me with a link to the Transportation Master Plan Primary Urban Cycling Map (PDF).  It has Blair as a “spine route” and no infrastructure on Bathgate.  Extract of the relevant section below – thick green is Cross-town Bikeway (the main Ottawa cycling route), blue is Spine Route and red and I’m guessing lowest quality/priority is Major Pathway.  Aviation Parkway gets a Major Pathway.  My personal opinion is that having Spine Routes on multi-lane suburban speedways like Blair (the n-s blue line on the right), Ogilvie, Montreal Road and St. Laurent just puts cyclists at enormous risk without bringing any infrastructure or modal shift benefits. 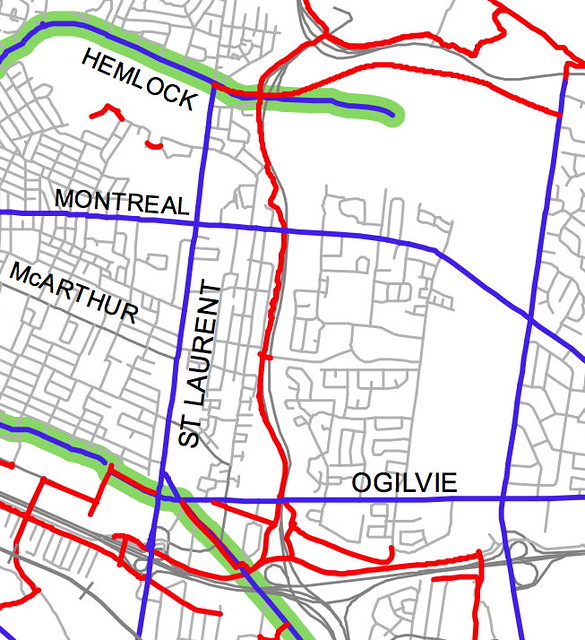 La Cité collégiale is between Den Haag in the north and Des Pionniers in the south, which is Ward 13 – Councillor Peter Clark.  (Ward 13 map PDF.)