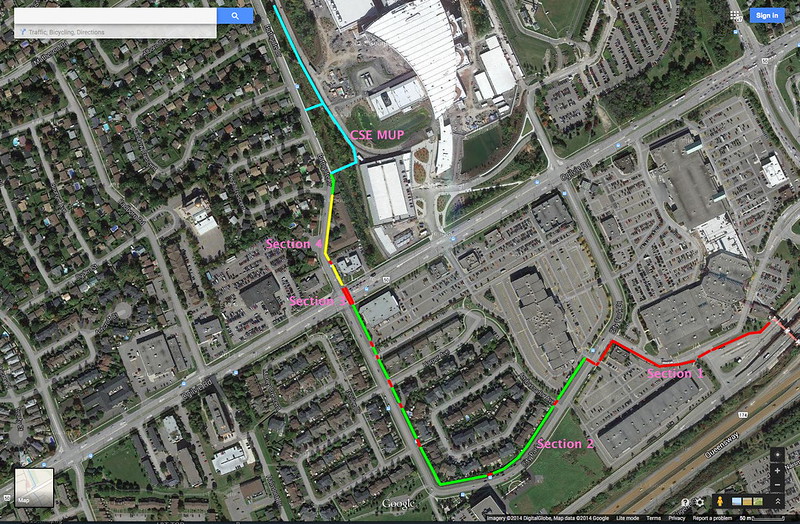 Section 1: some pedestrians
Section 2: Basically zero pedestrians.  While this may look like it fronts on houses, they are suburban mall houses, with a giant wall all along the sidewalk (see image below).
Section 3: Very dangerous crossing of Ogilvie.
Section 4: This fronts on a drive-in Starbucks and an old-age home, so in theory there could be some pedestrians.

I’m not proposing this as an ideal route.  It’s just a thought exercise about how a cyclist could actually get safely (i.e. not on the road) from Blair Station to the NRC campus (or with a longer route to Cite Collegiale).  I’m not a vehicular cyclist and I will never be.  I’m certainly not a suburban mall and highway vehicular cyclist.  The sidewalks selected are basically unused (they don’t front on anything but fence, blank building walls and trees), I can’t imagine they get more than a dozen pedestrians a day.  You’d want to count pedestrians and if the numbers made sense, change the sidewalks to be multi-use pathways.  You’d also want to do some work around the bus stops and particularly at the Ogilvie crossing to make it safe for everyone.

If you want to add Cite Collegiale you basically make the entire east-side sidewalk on Bathgate a MUP.  The entire east sidewalk north past the old-age home fronts on uninterrupted government-owned trees, no one walks there.  You’d just need to figure out some treatment around the few bus stops.

Ideally there would also be secure bike parking at Blair Station, for people who don’t want to take their bike back and forth on the (forthcoming) train.

This also assumes that the central road through the NRC campus continues to be blocked as it is now, so that pedestrians and cyclists have to use either Bathgate or Blair to go north.

I thought enabling this kind of cycling connectivity was part of the planning they would do in the Blair Station Transit-Oriented Development plan, but it isn’t.  The TOD plans have two built-in assumptions:

“Burnaby doesn’t have a traditional downtown centre, like in Langley or Maple Ridge or Chilliwack,” Mr. Geller said. “Burnaby has a collection of shopping districts and business parks.”

This is not modern development.  This is just Place du Portage with housing and a bunch of theoretical walking and cycling and public space amenities that no one will ever use.  Inward-facing, isolated from the surrounding context.

You can see from the September 2013 TOD information session that the Blair scope includes mostly the mall and its parking lots, and a tiny skim of housing surrounding it.  The vast housing to the north and the major employment and school nodes to the north get not even a sketch of connectivity.

Blair TOD – Pedestrian and Cycling Network (PDF) – all on-street cycling.  In the suburbs.  Where no one expects to see a bike.  Particularly laughable is the existing cycling on Ogilvie, which by putting cyclists in high-speed traffic is roughly like aiming bullets at the cyclists and seeing if they can dodge.  Other than vague-at-best “bike on the road and get there somehow” there’s no indication of how commuters would get by bike from Blair to CSE, CSIS, NRC (all with thousands of workers minutes from the station) or to Cite Collegiale.

Blair TOD – Street Network (PDF) on the other hand has bold black lines of car traffic arrowing everywhere.  Who would ever walk or cycle to or from a station?  Park-and-ride or “kiss-and-ride” are clearly the main modes imagined.

Blair TOD – Conceptual Images A (PDF) shows a fantasy of the mall turning into parkland and mid-rise.

The suburban housing shield wall ensuring almost no one will set foot on the City Park north and east sidewalk curve. 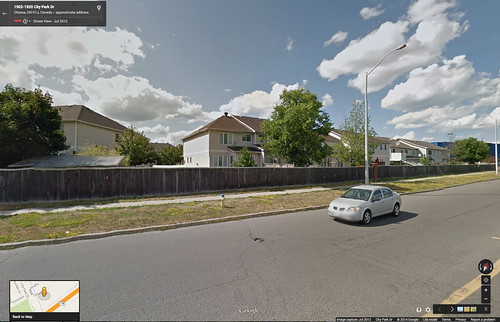 The new CSE MUP has very nice signage.  Unfortunately the MUP is blocked off until the end of construction I guess. 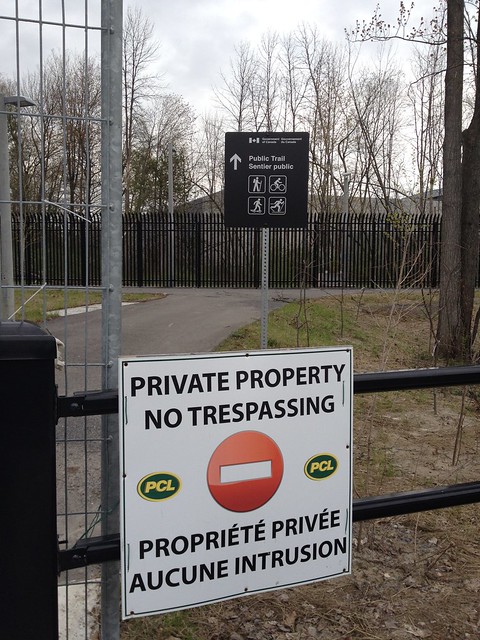 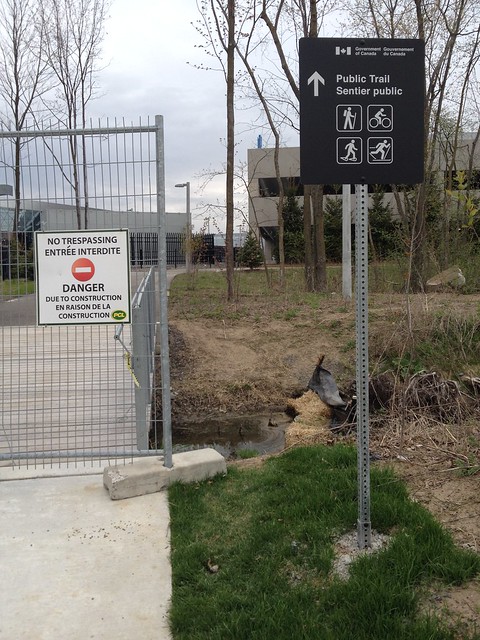